Prelude: Some of y’all asked what happened to Dan* aka White Guy from Tinder and why I thought we would be better as friends (If you have NO idea what I’m talking about…click here to catch up!)

Well….I met someone in the time frame shortly between me and Dan’s first and second date. I don’t believe in “seeing” (whatever that definition means) two people at the same time. I don’t have the time or energy to do so. So insert, Kameron. I met Kameron one late night while standing in line for tacos. He struck up a conversation and we ended up eating our tacos together, and kissed within 20 minutes of meeting 🙃 Two months later, here we are.

Don’t ask me if we are dating or “what we are doing” because dating in 2017 is weird enough. We enjoy each other’s company, he legit thinks I’m funny (even though I’m mad corny), and he has so many funny life stories that I hang onto his every word.
AND I didn’t meet him off Tinder, so *high-five* to me.

Oh…did I mention he’s 23? A whole three years my junior? Hence the nickname “Mr. 23” came from….that’s how I referred to him for the longest to other people.

So, that’s him…I’m sure you might see more of him in future posts so don’t hit me with the “HARPO WHO DIS MAN” later.

tl:dr – I stopped seeing Dan mostly because he used the word “c*ck*” in causal conversation. WE don’t use that word. It grossed and freaked me out. okay byeeeeeeeeee

Kameron and I spend much of our time downtown, mostly at our favorite bar, or grabbing tacos, or cooking dinner at my place before passing out on the couch while watching Netflix. We needed to get away from downtown so I’ve been , okay, flat-out telling him, that I wanted to go to TopGolf. The one in Orlando just opened up and I wanted to see what it was about. All my friends in Atlanta talk about this place and apparently, it’s in a Future song, “Massage In My Room” – “Got your main at TopGolf”,  soooo we had to go, because I too, wanted to be the main at TopGolf.
(KAMERON WANTS Y’ALL TO KNOW THAT I WOULDN’T KNOW ABOUT THAT LYRIC IF IT WASN’T FOR HIM lololol)

If you’re not familiar with TopGolf it’s sort of like a Dave and Busters, but with a driving range instead of arcade games.

We pulled up to TopGolf Orlando on a Friday afternoon around 4 p.m. and I expected it to be mostly empty because of the time. But the parking lot was packed. TopGolf was on one end of the parking lot and Andretti Indoor Karting & Games sat at the other end. Andretti must be new because I never even heard of that place before. But it’s a whole date night in parking lot.

We wanted to get there early because TopGolf has a tier pricing list depending on what time of the day it is. Least popular time is the cheapest and late night is more expensive. The pricing is per bay and per hour. So if you bring a bunch of friends and split the cost, it’s not that bad. But since it was just the two of us, we figured we would save that $10 and use it towards Happy Hour somewhere.

When we walking inside to the counter, the guy took Kam’s name and phone number, gave him a membership card, and asked us if we cared what bay we were in. We didn’t know any better, so we said no, we didn’t care and he gave us our bay number, 202. We were so confused on where and how to pay. He told us we paid at the end.

TopGolf has 102 bays spread along their three-story building. We were at the absolute, last bay on the left. Okay, NOW we get why he asked. 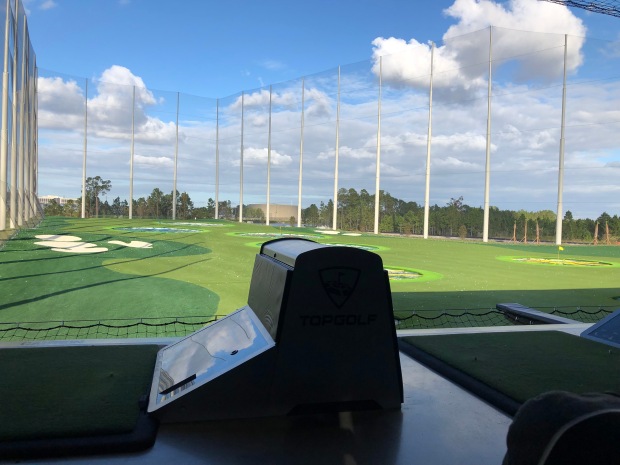 Kind of hard to see in the picture above, but they have these holes with nets in the ground with flags. Those are your targets that you hit your microchip golf balls into. Definitely much easier to hit said targets if you are placed directly in front of them. But now we know for next time.

Once we found our bay in No Mans Land, we had a worker come over and explain the rules to us:
1) No Happy Gilmore (which I never seen) so basically, don’t get a running start to hit your ball
2) If you’re not hitting the ball, stand behind the red line so you don’t get hit with the club by the person swinging
3) Don’t fall over the yellow, caution edge (which Kam was like, obsessed with and kept kneeling down to touch and kept asking workers has anyone fell and when they said “No”, he said, “…Not yet…”)

They set us up on this t.v., similar to what you would find at a bowling alley (HINT: Have them set it up where it changes players automatically…we kept hitting targets on each other names and earning each other points and we are WAY too competitive for that 😂)

Your hour in the bay starts immediately. I have a bladder like a chihuahua, so I had to literally run back to the front entrance to the restrooms and run back. $40 an hour?! You better believe that we were going to get our full 60 mins in…tf?

Kam was putting off (is that the name of it when you’re hitting the ball? 🤔) *EDIT: I now know this is called “Teeing off”. Thanks Sarah S!) by the time I got back and our server, Alyssa, was waiting on me to take our drink orders. A double Jameson on the rocks for him and a Jack & Ginger beer for me. They were quick with the drinks and also had a full dining menu.

The Lifetime Membership card. Costs you $5 either way, so might as well get the lifetime card and not pay for a new card every time you go

Alyssa helped me pick out a club. They had both men and women clubs. I know absolutely nothing about golf, so I didn’t know I needed driver one, a putting thingy, or wedge. Kam was hitting with a driver, so I hit with a driver.

I. DID. FREAKING. HORRIBLE. The club almost slipped out of my hands the first time I swung AND I missed the ball like three times before it barely flew over the platform. Kam tried to show me how to properly hold it so it wouldn’t go flying out of my hands, but it hurt to hold it that way so I held it the way I wanted to, making sure to hold on tight. 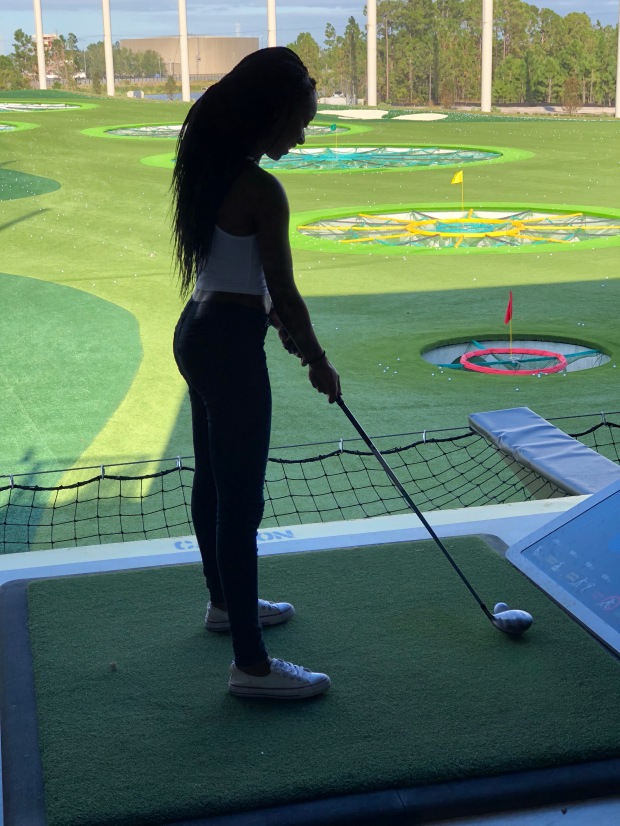 But once I got the hang it of it, I did pretty good! I even hit the green target a few times. There are different games you can play with the targets using the directions on the TV screens. It became REALLY fun to play the more we kept drinking 😉
Once we were 15 minutes away from our full hour, our server, Alyssa came by asking if we wanted to add-on more time. At that point, you have the option to add on time by 15, 20 or 30 minutes. We added on an extra 30 which was perfect timing because by then, we had definitely worked up an appetite. They tried to get us to stay for dinner, but it was our favorite time of the day…HAPPY HOUR. But before we left, Alyssa was kind enough to snap some photos for us. 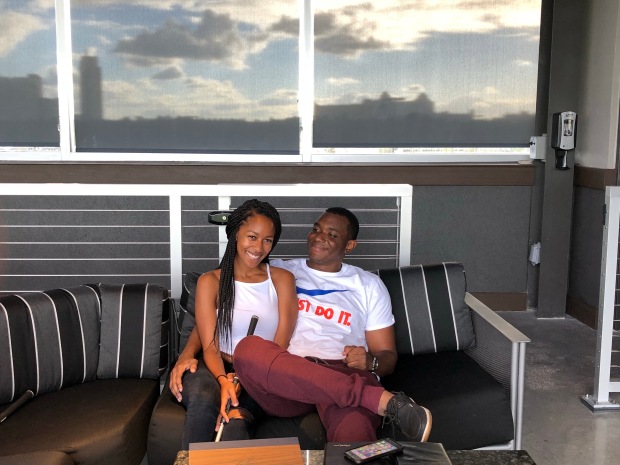 Kam likes candid shots, so if you see him in a future blog post 99.9% of the time, he’s talking in the middle of me shooting a picture 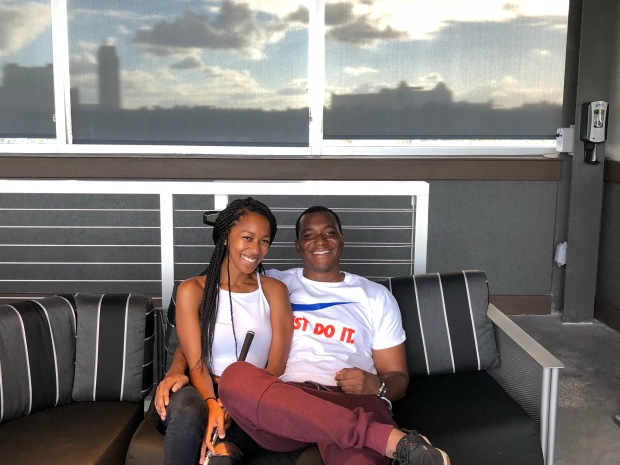 We’re not too shabby looking, huh?

Topgolf is right off of Universal Blvd in Orlando with the entertainment complex, I-Drive 360  , one of my favorite touristy spots in Orlando because I like to sit on the fake grass in front of the Orlando eye with ice cream from the Ben & Jerry’s shop.

But we caught dinner at Yardhouse with just less than 30 minutes of Happy Hour time to spare. Got Russian Mules, and split the appetizers chicken nachos and a meat-lovers pizza (Apps are half off during Happy Hour!). Overall, it was a perfect day.

Can’t wait to venture away from downtown again…wonder what we will get into next!